Blue light is usually referred to as radiation with wavelengths between 400 and 500 nm. This waveband is within the visible spectrum, has relatively high energy, and has pronounced effects on plant growth and flowering. Our perception of blue light, especially at shorter wavelengths (for example, 400 to 425 nm) is low compared to green.

light. In contrast, blue light is considered equally effective as green or red light at driving photosynthesis. Thus, while blue light can appear somewhat dim to us, it has high energy and is useful for plant growth applications.

Blue photons drive the photosynthetic reaction, although from an energy standpoint, one might consider them less efficient than green or red photons because their high energy isn’t fully utilized; some of the energy is essentially lost compared to photosynthetic photons with a longer (less energetic) wavelength. However, at least a minimal intensity of blue light is needed in sole-source (indoor) lighting applications for normal plant growth. In addition, blue light regulates the opening of stomata, which are the tiny openings on leaves that control both water loss and the uptake of carbon dioxide. Generally, only a low intensity of blue is needed in a light spectrum for fully functional photosynthesis. Therefore, indoor lighting (such as in vertical farming) and greenhouse lighting usually include blue in the spectrum.

Generally, blue light suppresses extension growth; plants grown with blue light are usually shorter and have smaller, thicker and darker green leaves compared to plants grown without blue light (Figure 1). In the production of ornamentals, these attributes can be desirable because in essence, blue light can act as a growth regulator. The utility of blue light as a growth regulator is pronounced with indoor lighting and generally has less or no growth-inhibiting effects in supplemental greenhouse lighting. There are some reports in which extension growth is actually promoted under only blue light, although this response seems to be crop specific. 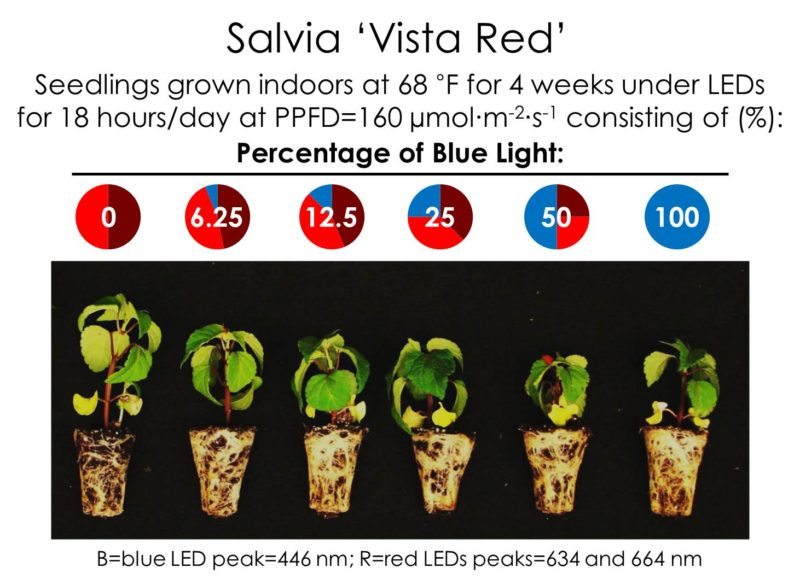 Figure 1. Seedlings grown indoors with blue light are often shorter, and have smaller leaves, than those grown under only red light. Plants were grown at the same photosynthetic photon flux density (PPFD) in an environmental growth chamber. Research from Heidi Lindberg and Erik Runkle, MSU.

Radiation with shorter wavelengths (blue/UV) stimulates the production of compounds that can influence leaf coloration. For example, in the absence of blue/UV radiation, plants that have purplish leaves outdoors may have green leaves. In some leafy greens crops such as lettuce, blue/UV also increases the production of healthful compounds such as antioxidants and some vitamins. Thus for these crops, delivery of blue/UV radiation prior to marketing can increase crop quality attributes such as leaf coloration and nutrition. Similarly, in the absence of

At a low intensity, such as that typically used to deliver photoperiodic lighting (1-2 μmol∙m–2∙s–1), blue light does not regulate flowering of most daylength-sensitive crops. However, at a higher intensity (such as 20 μmol∙m–2∙s–1 or higher), blue light can promote flowering of long-day plants and inhibit flowering of short-day plants. In recent research at Michigan State University, we delivered moderate intensities of blue light in our greenhouses in an attempt to regulate flowering and suppress extension growth. While we were successful at regulating flowering, there was no consistent effect on suppressing plant height.

Blue LEDs have become very efficient and inexpensive because they are used to create white LEDs for human applications. However, because of the high energy of light emitted from blue LEDs, and because the blue light appears relatively dim to us, people should never look directly at blue LEDs without UV/blueblocking safety glasses.