Properties of light. How chlorophylls and other pigments absorb light.

If you've ever stayed out too long in the sun and gotten a sunburn, you're probably well aware of the sun's immense energy. Unfortunately, the human body can't make much use of solar energy, aside from producing a little Vitamin D (a vitamin synthesized in the skin in the presence of sunlight).

Plants, on the other hand, are experts at capturing light energy and using it to make sugars through a process called photosynthesis. This process begins with the absorption of light by specialized organic molecules, called pigments, that are found in the chloroplasts of plant cells. Here, we’ll consider light as a form of energy, and we'll also see how pigments – such as the chlorophylls that make plants green – absorb that energy.

What is light energy? 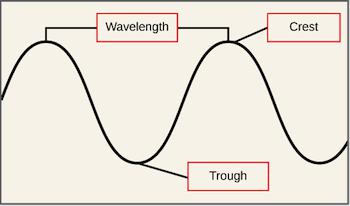 Image of a wave, showing the crests, trough, and wavelength (crest-to-crest distance).

The electromagnetic spectrum is the entire range of wavelengths of electromagnetic radiation. A longer wavelength is associated with lower energy and a shorter wavelength is associated with higher energy. The types of radiation on the spectrum, from longest wavelength to shortest, are: radio, microwave, infrared, visible, ultraviolet, X-ray, and gamma ray. Visible light is composed of different colors, each having a different wavelength and energy level. The colors, from longest wavelength to shortest, are: red, orange, yellow, green, blue, indigo, and violet.

The visible spectrum is the only part of the electromagnetic spectrum that can be seen by the human eye. It includes electromagnetic radiation whose wavelength is between about 400 nm and 700 nm. Visible light from the sun appears white, but it’s actually made up of multiple wavelengths (colors) of light. You can see these different colors when white light passes through a prism: because the different wavelengths of light are bent at different angles as they pass through the prism, they spread out and form what we see as a rainbow. Red light has the longest wavelength and the least energy, while violet light has the shortest wavelength and the most energy. 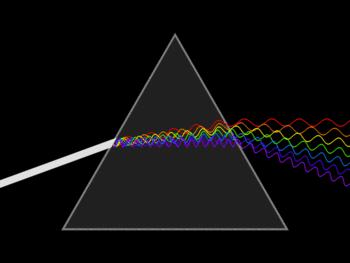 The set of wavelengths absorbed by a pigment is its absorption spectrum. In the diagram below, you can see the absorption spectra of three key pigments in photosynthesis: chlorophyll a, chlorophyll b, and β-carotene. The set of wavelengths that a pigment doesn't absorb are reflected, and the reflected light is what we see as color. For instance, plants appear green to us because they contain many chlorophyll a and b molecules, which reflect green light. Optimal absorption of light occurs at different wavelengths for different pigments. Image modified from "The light-dependent reactions of photosynthesis: Figure 4," by OpenStax College, Biology (CC BY 3.0)

Most photosynthetic organisms have a variety of different pigments, so they can absorb energy from a wide range of wavelengths. Here, we'll look at two groups of pigments that are important in plants: chlorophylls and carotenoids.

There are five main types of chlorophylls: chlorophylls a, b, c and d, plus a related molecule found in prokaryotes called bacteriochlorophyll. In plants, chlorophyll a and chlorophyll b are the main photosynthetic pigments. Chlorophyll molecules absorb blue and red wavelengths, as shown by the peaks in the absorption spectra above.

Structurally, chlorophyll molecules include a hydrophobic ("water-fearing") tail that inserts into the thylakoid membrane and a porphyrin ring head (a circular group of atoms surrounding a magnesium ion) that absorbs light^11start superscript, 1, end superscript.

A chlorophyll a molecule has a hydrophobic tail that inserts into the thylakoid membrane and a porphyrin head that captures light energy.

Carotenoids are another key group of pigments that absorb violet and blue-green light (see spectrum graph above). The brightly colored carotenoids found in fruit—such as the red of tomato (lycopene), the yellow of corn seeds (zeaxanthin), or the orange of an orange peel (β-carotene)—are often used as advertisements to attract animals, which can help disperse the plant's seeds.

In photosynthesis, carotenoids help capture light, but they also have an important role in getting rid of excess light energy. When a leaf is exposed to full sun, it receives a huge amount of energy; if that energy is not handled properly, it can damage the photosynthetic machinery. Carotenoids in chloroplasts help absorb the excess energy and dissipate it as heat.

What does it mean for a pigment to absorb light?

When a pigment absorbs a photon of light, it becomes excited, meaning that it has extra energy and is no longer in its normal, or ground, state. At a subatomic level, excitation is when an electron is bumped into a higher-energy orbital that lies further from the nucleus.

Only a photon with just the right amount of energy to bump an electron between orbitals can excite a pigment. In fact, this is why different pigments absorb different wavelengths of light: the "energy gaps" between the orbitals are different in each pigment, meaning that photons of different wavelengths are needed in each case to provide an energy boost that matches the gap^44start superscript, 4, end superscript.

When a pigment molecule absorbs light, it is raised from a ground state to an excited state. This means that an electron jumps to a higher-energy orbital ( an orbital that is further from the nucleus).

Image modified from "Bis2A 06.3 Photophosphorylation: the light reactions of photosynthesis: Figures 7 and 8," by Mitch Singer (CC BY 4.0).

An excited pigment is unstable, and it has various "options" available for becoming more stable. For instance, it may transfer either its extra energy or its excited electron to a neighboring molecule. We'll see how both of these processes work in the next section: the light-dependent reactions.