Recently, people began referring to PAR, PPF, and PPFD as ways to measure light in photosynthetics lighting applications. The purpose of this article is to explain what these terms mean, correct some common misunderstandings and help growers understand how the science behind these terms can be used to determine proper light levels to grow happy, thriving plants.

What the heck is PAR?

PAR (Photosynthetically Active Radiation) is an often used (and often misused) term. It is NOT a measurement or “metric” like feet, inches, or kilos. Rather, it defines the type of light (scientists call light “electromagnetic radiation”) needed to support photosynthesis in plant life. Through photosynthesis, plants convert light energy into chemical energy, which is the food they use to grow and thrive. 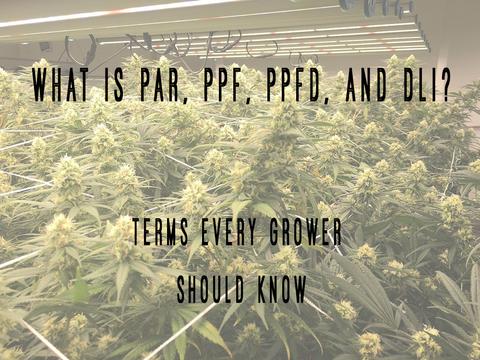 So, the first thing to understand about PAR is that it is the part of the electromagnetic radiation spectrum (light) that is useful to plants and algae to activate photosynthesis -- it is NOT a measurement. What really counts is PPF, PPFD and DLI.

When selecting a lighting system or fixture that will trigger and promote photosynthesis, there are three measurements that are important:

How much light the fixture produces

How much of that light is available to the plants

How much light the plant receives during the photoperiod.

The first measurement is Photosynthetic Photon Flux or “PPF” which measures the total amount of light that is produced by a light source each second. Put another way, PPF tells us how much PAR is emitted by a light source per second. More technically, PPF measures the “photosynthetically active photons emitted by a lighting system per second”. This measurement is expressed in “micromoles per second” and we’ll get to micromoles in a minute. Note though, that PPF does not tell us how much of the measured light actually lands on the plants or any other surface. It is probably the second most important way of measuring a lighting system, but, for whatever reason, 99.9% of lighting companies don’t list it. PPF is expressed by scientists and light engineers as: μmol/second.

The second measurement is PPFD which measures the light that actually arrives at the plant or algae. Photosynthetic Photon Flux Density or “PPFD” is a measurement of the amount of light that actually reaches your plants and algae or, as a scientist might say: “the number of photosynthetically active photons that fall on a given surface each second”. PPFD is a ‘spot’ measurement of a specific location on your plant canopy, and it is measured in micromoles per square meter per second. This measurement is expressed by scientists and light engineers as: μmol/m2/s.

The third measurement is DLI (Day Light Integral) which measures the total amount of light that is delivered to a plant every day. The grower can think of DLI as the plant’s daily “dose” of light, though a scientist would probably say DLI is a cumulative measurement of the total number of photons that reach the plants and algae during the daily photoperiod. DLI measures the number of “moles” of photons per square meter per day and is expressed as: mol/m2/d.

Obviously, if you leave your lights on longer, your plants absorb more light. Or, put in more technical language, a lighting system with a lower PPF can deliver the same DLI to an aquarium compared to a lighting system with a higher PPF if the photoperiod is extended. DLI is analogous to the total amount of rain that falls during a storm, as opposed to how fast the rain fell (which would be PPFD). DLI is the most important metric for determining the overall growth rate of plants and algae. Once you know the preferred DLI of your plants and/or algae, you can easily set up a lighting system to deliver the required amount of light. Properly designed photosynthetic lighting systems start with defining the required DLI.

There are huge numbers of photons or “light particles” in visible light --- in fact, the quantity is so large that we cannot easily express it using normal numbers, so we use two measurements commonly used by scientists when measuring huge quantities. The first number, which is called a Mole, is equal to something called “Avogadro’s number”, which is 602,214,150,000,000,000,000,000! For a more manageable number, a micromole is a millionth of a mole. Much better, right?! In plain English, a micromole of photons (which would be one millionth of Avogadro’s number) is 602 quadrillion. Since these numbers are so large, it is easier to reference quantities of light in moles and micromoles.

PPF tells us how many photons of light are emitted by a light source each second.

PPFD tells us how densely the fixture distributes the light photons on a one meter square target (i.e. your plants and algae) in one second.

DLI tells us how many photons were delivered to a one meter square target in a full photoperiod (i.e. a day).

Every aquarium and lighting system is different, and there are numerous factors that affect the total amount of light which is delivered by a light fixture. So, while ‘lumens’ was easy, it really had no consistent link to the amount of light you were delivering to your plants and algae. PAR, PPF, PPFD. and DLI are precise and consistent terms and measurements used by scientists, algae researchers, horticulturists and labs around the world --- but they can be difficult to memorize and grasp. So here’s a way to make it easier:

Think of light as rain and the light fixture as a cloud.

PPF tells us how many raindrops are falling from a cloud every second.

Let’s assume that cloud produces one million raindrops per second. If it is a large cloud the size of the state of Texas, you probably wouldn’t even know it was raining outside. But, if the cloud was the size of a car, you would probably want to put on a life vest if you were directly under this cloud! The raindrop density (PPFD) from the car-sized cloud in the second scenario would be very apparent to the unfortunate person under it. It is the same scenario with lighting systems. PPF tells us how many photons are being produced by a lighting fixture every second, but it doesn’t tell us where the photons are landing. That’s why we need PPF-Density or PPFD.

As an example, a 48” LED light bar, may produce a total of 90 micromoles per second (PPF) --- that’s from the entire fixture. But under it, when you measure the amount of light that arrives at the plant or algae, you are measuring the light that falls on one square meter of surface area every second (PPFD) --- a far more important measurement if you are a plant and one where the number of micromoles is higher in a typical growth environment.

This is NOT a measurement or “metric” like feet, inches or kilos. PAR defines the type of light which is needed to support photosynthesis in plant life.

A measurement of the light (photons) that reach the target each second. PPFD is measured over a one meter square area in “micromoles per square meter per second” and expressed as μmol/m2/s.

A cumulative measurement of the total amount of light (photons) that reach the target during the photoperiod. DLI is measured over a one meter square area in “moles per square meter per day” and expressed as mol/m2/d.

One millionth of a mole or 602 quadrillion.

The name physicists give to light particles.

The period of time during which natural or artificial light is available to promote photosynthesis in plant life each day.